State of the eUnion – Government 2.0 and Onwards 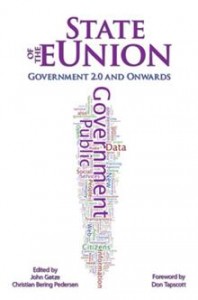 In this book, 34 global thought-leaders in the field, including Don Tapscott, Tim O’Reilly and Lawrence Lessig, have contributed their views and ideas about the current state of eGovernment and what has come to be known as Government 2.0.

Release of “State of the eUnion: Government 2.0 and Onwards” Book

The future of eGovernment is up for discussion today, when ministers of IT and Technology from all over Europe gather in Malmö, Sweden, for the Fifth Ministerial Meeting and Conference on e-government.

But what is the status of eGovernment? In a new book, published today, 34 global thought-leaders* in the field, including Don Tapscott, Tim O’Reilly and Lawrence Lessig, have contributed their views and ideas about the current state of eGovernment and what has come to be known as Government 2.0.

The book, “State of the eUnion: Government 2.0 and Onwards”, is assembled and published by one of Denmark’s leading government enterprise architects, John Gøtze, PhD.

“In many ways, eGovernment has come of age. The use of IT and digital media is today part of everything government does, so the ‘e’ is becoming obsolete. ‘eGovernment is just Government,’ as the saying goes, but it is important to realise that the ‘e’ has changed government forever, and will keep doing so, and hence we now talk about Government 2.0, ” John Gøtze explains.

As of today, the complete book is available for free online at 21gov.net. The content is licensed under a Creative Commons license, and therefore free to copy and distribute. The printed book is published soon by AuthorHouse, and will be available at Amazon later this year. A printed release version can however be ordered immediately via 21gov.net.

Edited by John Gøtze together with eGovernment consultant Christian Bering Pedersen, the book gives an overview of recent developments in Europe, North America, and Australia. The contributions to the book have all been collected over the last couple of months.

Don Tapscott, one of the world’s top 50 business thinkers, who is keynoting at the ministers’ conference, writes in the book’s foreword: “Every government leader, every elected official and every government employee should read this book and get involved in one of the most exciting challenges of our times – transforming government for effectiveness, relevance and success, enabled by a new medium of communications and required for the emerging citizens of the 21st century. The stakes are very high.”

The book’s contributors touch on a number of different subjects, all related to making government work better. Some deal with getting government data out into the open, breaking down data silos. Others focus on how to interact with the public through interactive websites. Still others discuss how to facilitate organizational change that will open up government.